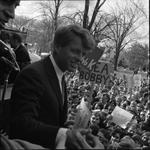 In 1966, Robert F. Kennedy visited Eastern Michigan University and delivered an address from the steps of Pease Auditorium. Kennedy began by rallying support for Congressman Wes Vivian, gubernatorial candidate Zolton Ferency, and G. Mennen Williams, poking fun at Williams’ wardrobe in the process. Kennedy next compares the voting record of Republican United States Congressmen to that of the Democratic vote, pointing out the shortcomings of several Republican voting records on issues such as an federal education act, Medicare, and the draft lottery, which he says should apply equally to everyone regardless of background or economic status. Embedded in Kennedy’s speech are humorous anecdotes and self-defacing quips.

Permission to Use - Permission to quote from this speech should be requested from the University Archives ( lib_archives@emich.edu).​